Now usually we dedicate ourselves to assisting intrepid travelers how to travel on a budget – regardless whether you’re a student or not! But just for a bit of fun, we decided to put together a selection of interesting options if money was not an object, you had just won the lottery, and you could travel anywhere.

This is how some folks live, so maybe if you blew all the money you have on one of these unique tickets, you too could rub shoulders with the super-rich. Or maybe you’re already super rich, and you’ll be inspired to do one of these outrageous travel experiences? But why stop at one when life is so short?! Just do all of them – and take us with you!

We begin with somewhere not strictly on earth at all, and a travel experience that has been a topic of conversation among the super-rich and the super-adventurous for some considerable time. Space tourism.

At the time of writing, there have only been seven official “space tourists”, all of whom have paid exorbitant amounts of money for the privilege, to the tune of 20-40 million dollars. But that is all about to change, with some companies looking to take advantage of this currently untapped market – and offer a more “affordable” package.

Estimated cost: Around 700 people have already signed up for the first commercial space flight with Virgin Galactic. A good deal cheaper than $40 million, this will still set you back $250,000.

Dive to the Titanic

Unlike the liner itself, mankind’s fascination with the most famous ship ever built shows no signs of sinking. But that’s what you’ll need to do if you want to visit the wreck of the Titanic, which sits in a watery grave, 2.37 miles (3.81km) on the North Atlantic floor. It would take around 5 hours to get down there, crammed into a specially built, pressurized submersible, so it’s not one for those of you with claustrophobia. And maybe no such a good idea if you’re afraid of water too. Various companies have been offering tours to the Titanic’s last resting place since 2012, but with the popularity of the legend as passionate as ever, they’re upping the ante to offer regular tours every year. Those that don’t want to take a dip can wait for the Chinese company building an exact copy of the doomed vessel.

Estimated cost: $59,680 looks to be the best offer from Bluefish. Expect this to get very competitive.

A vacation under water

Staying underwater for our next outrageously priced travel experience could see you living beneath the waves for a really unique holiday. Again, at the time of writing the Poseidon resort is not operational, but it is well on its way.

If you’ve got money to burn, you could be diving to an underwater hotel and resort, and staying in a suite like you’ve only ever seen in 20,000 Leagues under the Sea. Imagine lying back in bed, your tired eyes slowly closing, only to be greeted by the toothy grin of a curious shark gazing into your bubble bedroom. It might be fascinating and extremely educational, but you’re going to have some crazy dreams for sure!

Estimated cost: Undersea hotels have been around a while, but for the world’s first permanent underwater structure, it’ll set you back $15,000 per person per week. When some underwater room experiences in Dubai cost $5,000 a night – that’s not actually that bad. Sign us up!

Wait a second, why does it cost money to climb a mountain?! Ever since it was conquered by Sir Edmund Hillary in 1953, people have become obsessed with ticking it off their bucket list, so essential tour companies and guides have seen the opportunity to make a killing – unfortunately, quite literally. Many would-be summiters of the world’s tallest mountain have more money than sense, and hand over the cash and expect to be guided up to the top.

Experienced and inexperienced climbers have then paid the ultimate price in the so-called “death zone” above 8,000 meters, as “Everest tourism” takes its toll. Even if we had the money, this is one experience that demands some serious planning and consideration.

Estimated cost: The permit to even be on the mountain costs $10,000. But with guides, food, mountaineering gear and all the things in between, expect to the Everest Trip Cost to be anywhere from $35,000-$100,000. And don’t forget there are the six weeks you’ll need to acclimatize to the altitude.

Keeping your feet on the ground is a much safer idea – and an awful lot more relaxing. So instead of dicing with death, swap snow for sand and hire your own private island. This is what the elite do on a regular basis, to get away from prying paparazzi, to indulge in something they shouldn’t be doing with someone they shouldn’t be doing it with, or just to get away from the human race. Or maybe it’s just because they’ve got ridiculous amounts of money and they can. Either way, if you’ve got extremely deep pockets and money to burn, this could be the choice for you. We’re just going to buy our own instead.

Estimated cost: Prices vary, but expect to pay around $4,000 a night.

A room in the world’s most expensive hotel suites

If you don’t quite fancy the great outdoors, you can always shut yourself up in one of the world’s most expensive hotel suites, and you’ll probably never want to leave. From Dubai to London, New York to Las Vegas, Paris to Rome and everywhere in between, the upper echelons of hospitality know no limits of decadence. Maybe you’d like your own personal basketball court? Perhaps you want a recording studio included? For the safety conscious you might consider a bomb-proof suite with bullet proof glass. Whatever your tastes, there’s a ridiculously expensive hotel out there for you.

Estimated cost: It depends on location and features, but why don’t you follow in the footsteps of the likes of Bill Gates and Richard Branson and rent the penthouse suite at the Hotel President Wilson, Geneva. Rumored to be the most expensive and luxurious hotel accommodation in the world, it’ll set you back to the tune of $80,000 – $100,000 a night. There are other options around the world for only $14,000 a night though – so you might want to save a bit of cash there.

The world’s most expensive trip

How would you fancy parting with your hard earned cash to experience the world’s most expensive trip? A luxury travel company offered the chance to see every single UNESCO world heritage site in one of the most insane tour packages ever designed. As of last year (2016), there are 1052 UNESCO sites scattered around the globe, and not all of them are that easy to get to. Not only would you have to have a lot of money for this indulgent itinerary, but you’d also need a lot of time. It’s estimated it would take a minimum of two years to complete. Probably best to quit your job first then.

Estimated cost: You’re not getting much change out of $1.5 million. But don’t worry – you’ll be flying business class most of the time.

We can but dream, dear friends, we can but dream. Although it would be nice to have at least the option of indulging in these super expensive travel experiences, we get just as much fun and enjoyment out of slumming it as budget travelers! But to each their own, and we’ll let you know if we ever do an etramping article from space!

Over to you! If you could travel anywhere, where would you go? 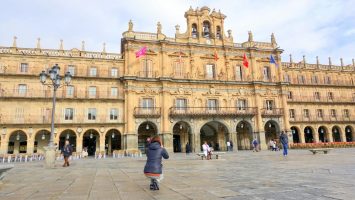 Sightseeing in Salamanca – The Educational Epicentre of España! (ERT Series)