Finding the Perfect Glasses to Travel

This article is going to be a little different than the usual articles we write. It’s still about travel, but it’s more about the fundamentals of travel. Here, I want to tell you about something which has made my life a lot easier recently. It’s something I was afraid of, but have come to love. I’m talking about glasses.

Currently, we’re our great European Road Trip that kicked off in Berlin, and you know what one of the biggest things we’re thankful for whilst we’re out here is? It’s our sight. Now, we could still enjoy traveling without it, there are another four senses to bamboozle into travel submission. However, it just wouldn’t be the same. We would miss our ability to see diverse architecture or catch each other when we do something stupid. Sight is, almost definitely important.

That’s why Cez was a little shocked when I told him that I really needed a new pair of glasses. Of course, I had told him that my sight wasn’t too great in the past, but I guess the years upon years I had been traveling without good quality glasses had made him think that I didn’t really need them (or was secretly hiding contacts). Turns out that I do (need then, that is).

It was a normal day; nothing special about it. Except I was headed to go and get my driving license course started. Being back in Poland for a while, I thought I might as well and it might come in handy when we set out on our Great European Road Trip.

So I went to the driving center and I got myself ready to start the theory course. I must admit, I was excited. I had been looking forward to getting behind a wheel for a while. Then it happened. They said I needed to have my vision checked. It was a normal thing, everyone had to do it.

So I did, and they told me. Three words I had been trying to avoid for years. Three words I didn’t want to hear, but really, knew that they were coming. “You need glasses.”

Why I had avoided Glasses

You might be thinking that this point, “Why Agness? Why not wear glasses when they could help you see better and overall make your life easier? You must have missed so much because you didn’t wear glasses.” Well, to an extent, you’re right. Without glasses, maybe I didn’t get to see some of the incredible sights I otherwise could have. It was a stupid idea to not wear them, I should have worn glasses, but there are a few main reasons why I – and others like me – can continue not to do so.

The biggest of those is that glasses just aren’t cool. At least, that’s the rhetoric I grew up with. Glasses are big and bulky and they make you look like a loser. If you wear glasses on the playground, you’re bound to end up on the receiving end of some bully.

There’s also the fact that they’re just incredibly expensive. Sometimes you’re looking at paying over $300 for a decent pair. Sure, they have the cheaper options, but those just look like they’re going to get you bullied; even as an adult.

So, what to do? I hadn’t ever worn good quality glasses properly in the past, now I was being told I had to if I was to pass my driving test. Luckily, I stumbled upon the PerfectGlasses.co.uk just in time. Now I know what you’re thinking. You’re thinking “No Agness, don’t order glasses online, so many things can go wrong!”. Well, you’re too late, I already did and nothing did. In fact, the whole experience from finding a decent pair to actually using them every day was excellent.

I picked cool glasses online. It’s not that I’m a hipster, but, well, I am. They suit me perfectly. I had originally worried about whether they would and if the image on the website would actually be representative. I mean, I’ve bought a lot of things online (especially in China) where the images look amazing on the advert, but when you actually end up getting them, they’re not so hot. Needless to say, this was one pair of good quality glasses which did look as good as they did on the web store.

The cool name was Benetton Bs007v I4. Ok, I’m being honest here, I don’t really know what the whole Bs007v I4 is about – it’s probably some type of production code – but then, who goes around telling people the name of their glasses anyway?

Tailoring Them to Me (Or You)

Now obviously, because I needed glasses for driving, I needed a certain prescription. That prescription, (in case anyone wants to see how bad their eyesight compared to mine is) is LE (left eye) -2.0 and RE (right eye) -1.75. To make matters worse, I was born with astigmatism. Now combine those two things together, and you might think that buying glasses online isn’t the best idea. How do you know they will be the right type?

Well, I had to go to have an eye test first, but in the end, it all worked out. The doctor was a bit shocked I was walking without glasses, but I used the eye test results and uploaded them onto the website. The report cards are all pretty standardized and the terminology doesn’t change, so it’s just a case of figuring out where to write everything on the website. Anyway, I inputted my results, my new good quality glasses showed up, and I couldn’t have been happier.

We’re currently traveling around Europe, and I have to say, the trip wouldn’t have been the same without having a pair of good quality glasses. I’m glad that I decided to get a pair before we left.

Agness Walewinder
Travel freak, vagabond, photography passionate, blogger, life enthusiast, backpacker, adventure hunter and endless energy couchsurfer living by the rule "Pack lite, travel far and live long!"
Do you want to contribute?
Publish your guest post on Etramping!
PrevPreviousBerlin by Bike
NextHow It Feels to Be Back in AmsterdamNext 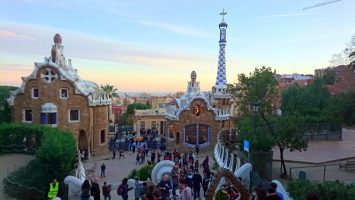 10 thoughts on “Finding the Perfect Glasses to Travel”