Eating Your Way Through Andalusia: A Guide on Where and What to Eat in the South of Spain

The South of Spain is known for beautiful beaches, great weather all year round, and friendly people. But another thing that Andalusia is known for the fantastic food that is offered. For those who are unfamiliar with the typical foods of Andalusia, here is your guide to the ins and outs of eating in the south of Spain.

This is one of the most important things you will learn about in Spain. Tapas bars in Spain are very popular and can be found on nearly every corner. What they offer is a smaller portion of food, allowing you to try many different dishes in one sitting.

The history of tapas comes from the meaning of the word (tapa = cover, or top). Many, many years ago, Spain had problems with flies. So when you went to a bar and got a drink, a fly would always land in it. As a result, the bars would place a piece of bread on top of the glass to prevent flies from going in. From this tradition came the idea of serving a small plate of food along with your drink, and has now become one of the best ways to eat in Spain! So don’t be surprised when that tiny portion comes out. It’s typical to eat your first tapa then order a second and third after. That being said, a group of people could order many tapas and then share them, which is also commonly done.

In many of the towns in Andalusia, when you order a drink you will receive a tapa for free. The drink, however, cannot be what they call a ‘resfresco’ which is basically anything that comes in a can such as coke or Nestea, or water. So one tapa and a drink may cost you anywhere between 2-4 Euros, depending on where you are. This makes for extremely cheap and delicious eating!

A wonderful breakfast treat, churros are strips of dough that are deep fried. I tried churros in Belgium twice but nothing can beat traditional churros from Spain, trust me! Typically these are either sprinkled with sugar or dipped in very thick hot chocolate. Okay, so it’s not very healthy breakfast like my protein waffles but what truly delicious things are healthy?

For anyone familiar with Mexican tortillas, forget it. This is what is known as ‘Spanish omelet’, a classic dish of eggs and potato, sometimes with onion added in. This lovely dish can be found anywhere.

Especially nearer the coast, you will find many dishes of different fried fish, such as cod, sardines, sole, or anchovies. Just watch out for bones!

This is ham, but not like you’ve ever seen it before. You will walk into a bar and see rows of cured ham legs hanging from the ceiling, and perhaps one on the counter ready to have the lovely cured meat cut into strips. This typical piece can be added to many types of meals, or perhaps served by itself with bread as a tapa.

These two cold soups are very similar, both with a base of tomatoes, garlic and olive oil. In salmorejo, flour or bread is added to make the soup thicker. Both are delicious and sometimes garnished with jamón and hard-boiled egg.

This dish, although apparently originating in Valencia, is a very typical meal. Rice tinted yellow with different vegetables, seafood, or food is cooked and served in a huge pan that can normally feed a whole group. You’ll normally see large families gathered together on the weekends sharing this meal.

With a base of bread crumbs, migas is a dish that can vary greatly depending on where you travel to. For example, you may see migas with different meats, such as sausage, fish, or vegetables. Almost always this dish includes olive oil and garlic.

This is something you’ve probably heard of even if you haven’t been to Spain.  Red wine with a pinch of liquor, orange juice or lemonade, then served with tons of fresh fruit. A perfect beach-side drink that can be easily made at home and tastes much better than a beer from different parts of the world.

A summery drink that is actually wine mixed with lemonade or tonic water, usually with a slice of lemon inside.

I hope you’re hungry! Andalusia is waiting to give your stomach a real treat. 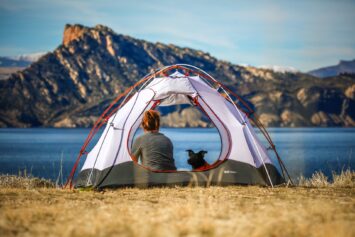 Easiest Tent to Set Up By Yourself 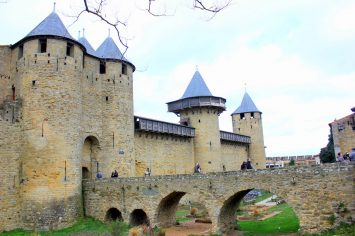 Before the Board Game – Visiting the Real Carcassonne (ERT Series)

4 thoughts on “Eating Your Way Through Andalusia: A Guide on Where and What to Eat in the South of Spain”