Agness in Africa: Becoming a Maasai for a Day!

Following five days of team building, working and exploring the Lake Naivasha region, I journeyed south with my fellow travelers and colleagues from Poki to Mount Suswa – a shield volcano just over three hours’ drive from Nairobi. What awaited was probably one of the most incredible experiences of my life – and certainly one of the most memorable. As much as I adored the zebras and other wildlife, it was visiting the Maasai people in the shadow of Mount Suswa that was to become the undoubted highlight of my Kenyan adventure – as I got to view their lifestyle from a unique vantage point.

Well, as close as I get without actually marrying one of the tribesmen – a scenario which was actually offered! Read on to find out more from this leg of my Agness in Africa series – becoming a Maasai for a day!

First of all, where exactly was I? Mount Suswa is located around 45 kilometres south of Lake Naivasha as the crow flies. As we’re not crows, we had to drive considerably further around the edges of the Hell’s Gate and Longonot National Parks. We were en route to Suswa Town, which is the local Maasai village at the foot of the volcano.

Mount Suswa itself is a shield volcano, and for those unsure what that means, it basically looks like a warrior’s shield lying down. This is as a result of the low viscosity lava that flows down its sides, which spreads further down the slopes, thus giving the volcano its distinctive shape. Mount Suswa is also distinctive in the fact that it has a unique crater – because there are actually two of them. We were lucky enough to be able to reach the first crater on a guided tour – but it is possible to climb to the top, which sits at 2,356 metres into the sky.

The volcano is located in the Rift Valley or the Great Rift Valley as it’s properly known. This division in East Africa running 6,000 kilometres in length is an enormous trench which separates two plate boundaries.

Some of the most stunning natural scenery in the whole continent can be seen in this region – and we in the heart of it. There’s a certain buzz you can get from climbing a volcano situated between two tectonic plates!

You can visit the region on your own steam, but Maasai people will request a fee if you’re crossing certain areas of their land – and quite rightly so. It’s much better to have your own guide, which we did in the form of Rueben and his team of bikers.

Once arriving at the foot of the volcano, we hopped onto our two-wheeled transports and rattled up to the first crater. As you might expect, the ride was incredibly bumpy, dusty and dangerous – but I loved every second of it! This is what adventure is all about!

After around an hour and a half getting a little saddle sore on the back of a motorbike, we arrived close to the crater’s edge and set up our base camp. After a short rest, we hiked around 30 minutes up to the actual crater and discovered some wonderful views of the surrounding countryside.

We spent around 1 hour exploring this strange, volcanic landscape, before heading back down to the village around 4 pm in the afternoon. With the sun thankfully lowering his head, it was time for the festivities to begin – and my amazing experience with the Maasai people!

Who are the Maasai?

Before I continue with my encounter, a word on the people I was encountering! The Maasi are an ancient, semi-nomadic people who have been located in the region between Kenya and Tanzania since the middle of the 15th century, but their ancestors would have migrated here from North Africa.

In an ever-changing world, the Maasai are a powerful symbol of Kenyan tradition and are praised for holding fast to their beliefs, the way of life and culture. They have become iconic to the country’s history, with their colorful clothing, jewellery, traditions and dances – and are arguably the most famous tribe in the whole continent as a result.

Their main source of sustenance comes from livestock and farming – the practice of which has remained the same for hundreds if not thousands of years. They are a fascinating indigenous people – and meeting them was a pleasure!

I bought some beautiful, traditional Maasai jewellery from the women in the village – a black bracelet and a blue necklace, handmade by Maasi craftswomen.

I wore them proudly for the rest of the day! I was also given the traditional Shuka – which is the Maasi’s distinctive red robe that they wrap themselves in.

This has a rich history unto itself, and I reckon I looked pretty badass wearing it! Red is the more common color – but patterns can vary – with some looking not too dissimilar from a Scottish tartan.

Finally, I was handed the bamboo stick which the Maasai use in their traditional warrior dance – called “Adamu.” It was a delight to behold as the bonfire crackled and the sun went down on an amazing day.

I was rapidly getting exhausted after our full day of excitement, with the children of the village constantly demanded my attention, running around and playing with them. They have boundless energy, and to keep up with them is just one of the many reasons I like to stay fit when traveling!

With evening drawing on, we witnessed how the Maasai sacrifice livestock for food and ate a delicious meal of grilled goat staring into the embers of the fire. But it was the dance that really took me – the famous jumping and singing ritual they have done for centuries – which is surprisingly hardcore!

By the end of it, what little energy I had left was channelled into making it back to the tents, to pass out under a stunningly clear, starry sky. Days don’t come much more memorable than this!

I spoke to many members of the Masaai tribe, many of whom have a good grasp of English or at least a basic ability to communicate with us. Maasai itself is an East Nilotic tongue, and the name actually translates as “one who speaks the Maa language.” I didn’t, of course, but I did manage to have an interesting conversation with a number of our hosts.

Aside from the language, this was a totally different world for me – as it would be to a great many people hailing from western cultures. There was no toilet I was used to, no shower facility, no access to make-up, or any other creature comforts we take for granted in the developed world. I had a dusty face and dirt on my teeth – but I didn’t care, I loved being amongst Maasai tribe every single moment.

During our return to civilisation (as we knew it) I met a charming Masaai man by the name of Paul Smart. An unusual name for a Masaai you might think! His real name was Simat Koilel, but everyone called him Paul and he was very kind and took good care of me as we made our way back from this crazy journey, ensuring we all drove safely on unfamiliar Kenyan roads.

Colleagues joked that we were embarking on a short African love story – which might have developed considerably if I had said yes to his proposal! It’s not the first time I’ve been offered a hand in marriage in my travels around the world – but it certainly was one of the politest! As much as I care for Paul I had to turn him down – as miy heart already lies elsewhere – it belongs to traveling!

The time had arrived when we had to leave the Masaai, but it was an experience that will live long in the memory and certainly my favourite activity while visiting Kenya. Next up, we were to spend some time at Diani Beach, but for now, I was too enraptured with meeting the Masaai to really think of anything else. Don’t miss the opportunity to visit the tribe should you ever find yourself in Kenya – but as always, please ensure you do it ethically and with a legitimate guide!

And although I have had to turn down a very romantic and respectful offer of marriage from a gentleman tribesman, it’s nice to know that a girl has options, right?! Maybe our paths will cross once more if ever I am traveling in this wonderful country again!

Have you ever visited an African tribe? Let us know your experiences! 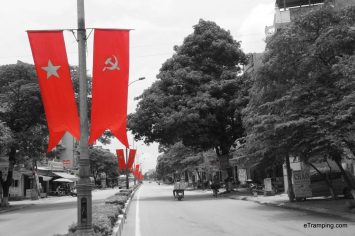 Photo of the Day: Vietnamese flags 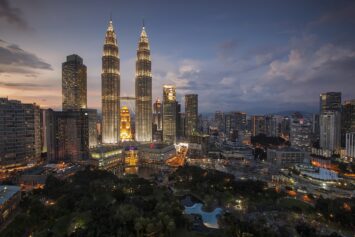 10 thoughts on “Agness in Africa: Becoming a Maasai for a Day!”