As drones become affordable and easier to use, more and more people are taking up drone flying as a hobby. If you are new, you will probably be comfortable using the drone transmitter that came with your quadcopter. However, as you grow into your hobby, you may begin to buy more drones into your collection.

Typically, each drone you get will come with a transmitter that only works with that particular drone. As you collect more aircraft, you may want to consider getting one radio transmitter to fly all your drones instead of having separate transmitters.

What is the Best Drone Transmitter?

To find the absolute best drone transmitter we have searched through most of the available transmitters for drones and read all the comments left by people who bought and used them. Then we compiled the list of the top 5 drone transmitters based on their pricing, specs and ratings by real users. Feel free to use the results of hours of our research now and thank us later in the comments.

Oh, and just so you know, there are also Buying Guide and FAQ sections below the top products that provide a handy overview of things you may need to know before and after you buy your new drone transmitter.

The Taranis X9 Lite is an entry-level drone transmitter, and it is also my top choice. The X9 Lite is remarkable because it blends the classic radio design of its predecessors, the X9D and QX7 transmitters, with FrSky’s latest ACCESS communication protocol and the Ersky TX/ Open TX operating system. The protocol supports up to 24 full-range channels and offers lower latency and higher baud which is preferable for racing drones. It is also easier to bind to the receiver and supports wireless upgrading of the firmware. The radio transmitter offers all the features of the older models and then some at an affordable price. 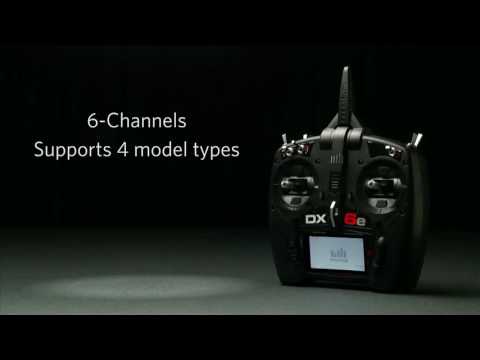 The DX6e AirWare firmware features Airplane, Helicopter, Sailplane, and Multirotor programming modes that allow you to fly almost any aircraft. It also allows cross-platform model sharing with other Spektrum transmitters and is easier to use for beginner pilots than the Open TX firmware of the X9 Lite. However, unlike Open TX, it is less customizable.

The DX6e radio transmitter also features a large model memory of 250 models compared to 60 models of the X9 Lite transmitter. However, the X9 Lite gives you more channels and a better radio link range than the DX6e at a lower cost. Overall, the DX6e features a better build quality and gimbal design and has a shorter learning curve.

The FS-i6X is also an excellent entry-level radio transmitter, and it is my budget option. Although it features only six channels and has a model memory of only 20 versions, the drone transmitter is programmable to support different aircrafts such as drones, mini quadcopters, and gliders. It is also straightforward to operate for entry-level users with a simplified user interface and controls.

The FS-i6X uses FlySky’s proprietary AFHDS 2A technology (Automatic Frequency Hopping Digital System, Second Generation). The system provides each transmitter and its receiver a unique ID for protection against signal interference while also providing bidirectional communication to send and receive various data with the iBus Protocol.

The radio transmitter has a range of 3280 feet and features an omnidirectional antenna that helps maintain a reliable connection. The FS-i6X transmitter also comes with highly-sensitive and efficient components with low power consumption to give you extended battery life

The Taranis QX7 is an older sibling of the X9 Lite and is one of the most popular radio transmitters for mini quadcopters. Although the X9 Lite delivers the same range, channels, and functionality at a lower cost, the QX7 offers better build quality and has more tutorial resources for new users.

New models of the QX7 features the ACCESS protocol digital interface, and it uses the highly customizable OpenTX operating system. Compared to its older sibling, the X9D, this radio transmitter is more ergonomic for thumbers with a broad face and thinner profile with rubber side grips for a comfortable hold. Like the X9 Lite, it also features haptic vibration and voice alerts and supports a spectrum analyzer function.

However, unlike the Spektrum drone transmitters, The QX7 supports a wired training function that is not as versatile as the wireless option. Other features include potentiometer gimbals with easy access to the tensioning system, although, unlike the DX6e, you would have to take off the back cover.

The Turnigy Evolution is another excellent newbie drone transmitter, and like the FS-i6X, it is ideal for FPV drone flying. It is also the only radio transmitter on my list whose design form does not resemble the typical radio but like a gaming console that is ideal for pinchers. Its form factor is attractive because it is considerably lightweight for easy portability. It is also ergonomic, with gimbals positioned for comfort and side rubber pads for easy handling.

The Evolution transmitter comes with eight channels and telemetry capability suitable for flying the best micro drones and mini quadcopters. It has excellent build quality with adjustable length gimbals with ball bearing support and illumination for an affordably priced transmitter. It features a generous monochrome LCD touch screen with simple menu navigation and is backlit for daylight and nighttime use. It also comes with a protective case that covers the face and gimbals while carrying it.

The radio transmitter uses the FlySky proprietary firmware, the AFHDS 2A (Automatic Frequency Hopping Digital System, Second Generation), which offers reliable communication with iA6, iA6B, iA6C, i10, and i10B range of receivers. However, this limits you to FlySky and Turnigy receivers because it is incompatible with other brands. The transmitter comes with a TGY-iA6C receiver with both SBUS/IBUS and CPPM/PWM protocols and dual high gain antennas that provide a more secure communication link.

We went through most of the drone transmitters available today and considered what people who used them are saying about these transmitters for drones. We also looked closely at their pricing and specs to find that FrSky Taranis X9 Lite 24CH Radio Transmitter is the overall best drone transmitter out there.

However, Flysky FS-i6X 6-10CH RC Transmitter is a very good affordable alternative for those who want to get one of the budget transmitters for drones.

For those who need the absolute best of the best, regardless of the price, Spektrum DX6E 6CH RC Radio Transmitter is the premium pick.

What You Should Know Before Buying Drone Transmitters

Number Of Channels And Frequency

The number of channels will determine the number of different features that you will be able to control. For instance, a 6-channel transmitter can control the throttle, pitch, roll, and yaw of your quadcopter, while the remaining two channels can control different flight modes and the failsafe. The extras get assigned to the switches, and having more channels gives you the ability to fly more complex aircraft. A quadcopter would typically require an 8-channel drone transmitter at the least.

Radio transmitters are available in different frequencies, but the most common is the 2.4GHz band. These transmitters can give you a control range of about 2600 feet in ideal conditions. However, it depends on the antennas and the sensitivity of the receiver. You can use boosters to improve the signal when other factors such as trees and building obstacles block you. However, most people will lose sight of their aircraft at about 1000 feet, and beyond that, it may be problematic to control something you can barely see.

The receiver is an electric device that receives commands from the drone transmitter via built-in antennas. It transmits them to the flight controller, which controls the actions of the drone. The radio transmitter and the receiver must be compatible for communication to work, and it often means they will both be of the same brand. However, some radio receivers do work with transmitters of a different brand, but they use the same protocol and frequency.

The protocol should be compatible with the flight controller and operating system of the transmitter. Unlike the transmitter firmware, radio receivers use universal communication protocols that include PWM, which is an outdated analog signal. The PPM or CPPM protocol is an improvement of PWM and is slightly faster.

However, both analog signals have been replaced by the digital signals SBUS/ IBUS and DSM2/ DSMX. The SBUS/ IBUS protocols have lower latency which makes them popular with drone hobbyists. The DSM2 protocol frequently hops between frequencies within the 2.4GHz band to maintain a good connection. However, most radio receivers are in this frequency band, and it may cause a slow response time due to interference. The DSMX protocol is more reliable because it handles a broad frequency band to limit interference from other drones operating in the same environment.

Radio transmitters come with operating systems, and OpenTX is the most preferred open-source system for drone hobbyists. The firmware is highly customizable, and with its companion PC software, it allows you to make channel assignments and many other configurations easily compared to other firmware.

Another advantage of OpenTX is telemetry. Telemetry is the information that includes signal strength, range, and battery power that the drone relays back to the transmitter. The data is either displayed on the transmitter’s LCD screen or via voice-enabled alerts.

Gimbals are the sticks on your transmitter that control the drone, and their quality affects how smoothly you fly the drone. There are two types of gimbals which are the Potentiometer and Hall Effect gimbals. The Potentiometer gimbals are analog, and they feature brushes at the joints, which makes them a bit rigid. Hall Effect gimbals use hall sensors with magnets for adjustments which makes them more durable and precise.

Apart from type, you should look at other factors, such as how easy it is to adjust for tension and length depending on if you pinch or thumb the sticks. Another factor is the mode which determines what channel or action is assigned to either gimbal.

There are four types of transmitter modes, and Mode 2 is the most popular in North America and is usually the default setting. This mode allocates the throttle and rudder actions to the left gimbal while the right has the elevator and aileron. Mode 1 is the opposite of Mode 2 and is typical in Europe and Australia.

Questions and Answers About Drone Transmitters

What is a drone transmitter?

A drone transmitter is an electric device that allows the drone pilot to control his drone via radio signals or channels. Drone transmitters feature left and right gimbals that direct the main movements of the aircraft. They also feature switches, antennas, an LCD screen, and the user interface or firmware.

How do drone transmitters work?

How far can a 2.4GHz transmitter work?

Drone transmitters are available in different frequency bands. However, the 2.4GHz band is the most common for drone transmitters. In ideal conditions, which means you have a clear sight of your drone, a 2.4GHz transmitter can give you a control range of about 2600 feet.
However, even though you may have the ideal conditions, other factors such as the antenna height and the receiver’s sensitivity may reduce the signal quality and shorten the control range.

How many channels can a drone transmitter have?

Four is the least number of channels that you would need in a drone transmitter. However, I would recommend getting a transmitter with at least 6-8 channels to allow you more flexibility in controlling the drone with more commands. 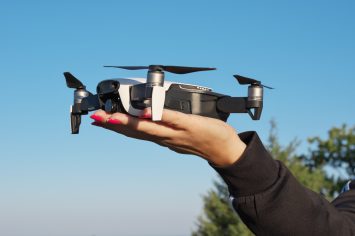