It has been more than a week since I have been in China. After visiting Chongqing province, I went to Hebei province (the town called Shijiazhuang, which is the capital of Hebei province), in order to see my boss, who has been in China, as far as I remember, for more than 2 years. I booked my tickets from Chongqing to Shijiazhuang train station 2 days in advance but unfortunately only the most expensive seats were available, so I had to pay more than 800 Yuan (£80) to go there. For me, it was the highest price I have ever paid for the transport in China. Buying tickets for me (I could speak only basic Chinese) was a great challenge. Before I left home, I always wrote some sentences on a piece of paper and then went to the place where I wanted to buy something and gave this paper to a person I wanted to speak to (I know, I know, that’s a very smart idea but also time consuming). I always smiled and tried my best to understand Chinese language. Everyone could see the effort I made in order to communicate with Chinese people (they were happy to hear me talk in Chinese and I was proud of myself to speak their language). I saw many foreigners getting frustrated when they spoke fluent English to Chinese people who didn’t understand English at all. Here, in China, I realised that sometimes your smile and positive attitude might help a lot and people can treat you differently. The journey was very comfortable though as I had my own room on the train with a bed and TV. 12 long hours and I was finally here. My boss picked me up from the train station and took me to the hotel.

My first day here was a little bit miserable and I couldn’t make friends with anyone as people were different here. Most of Chinese people couldn’t speak English, but it wasn’t a big problem for me. The problem was that people didn’t even want to start a conversation with me. Whatever I asked for or whatever I said they just gave me dirty looks and walked away. I felt lonely. I missed my friends. I spent hours and hours in my hotel waiting for my friends to be available on Facebook or Skype to have a word with me. My mom and most of my friends were so supportive, they were all like “Agness, I wish I was there now”, “You are so lucky and brave to be in China” or “Don’t you even dare come back to England!” :-). To be honest, even when I sometimes felt bad, I never thought about going home (coming here was my mature decision and my dream). Of course, I made some friends with American teachers but they were too busy to show me around or go sightseeing with me. We only met at night in different restaurants to have a dinner together and have some fun.

On my second day, I decided to take my digital camera with me and go to the city centre. Just right after I left my hotel, I met a lovely Chinese girl who was waiting for her bus at a bus stop in front of my hotel. 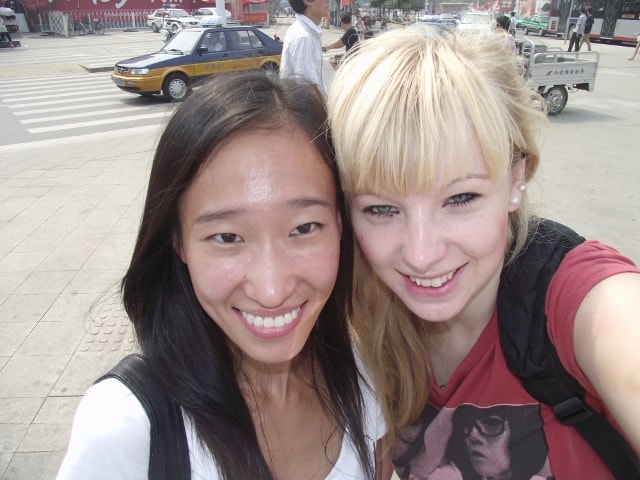 I asked her how to get to the city centre and she said “Follow me”. It turned out that it was her day off and she wanted to do some shopping. We went together and had a great time. I bought some Chinese jewellery, shoes and lots of sweets. We had a lunch and dinner together, then went for a walk around the city and finally ended up in a small candy shop where I tasted many different kinds of lollipops. That was an awesome day! She made me smile all the time and we took so many pictures. When I look at them now, I want to go back there and give her a hug!:-). I forgot to mention that the girl didn’t speak English. If she wanted to say something to me, she used her online Chinese-English dictionary on her phone which automatically translated everything for her within a few seconds. What a great and useful stuff! This day cheered me up a lot.

On my third day, I met 3 Chinese guys who worked for China Air force. I saw them in the park and asked them to take some pictures of me. They were very friendly and could speak very good English. While we were in the park getting to know each other, they showed me lots of pictures of Chinese jets and planes they used during their duty. Cool pictures. Later on, they took me to a nice restaurant where we had a lunch together. They also rang their friends to join us. We went to the market square, shopping mall and many other places around Shijiazhuang. I had such a good time!!
At night, I came back to my hotel. I smiled to myself because…. I knew I was on a good track again :-)! Next day, I bought train tickets to Beijing. As it turned out, the tickets were easy to get so I didn’t have to buy them in advance. I packed my backpack, took my Lonely Planet book with me and I was ready for the next adventure in Beijing!!!

A few words about Shijiazhuang. 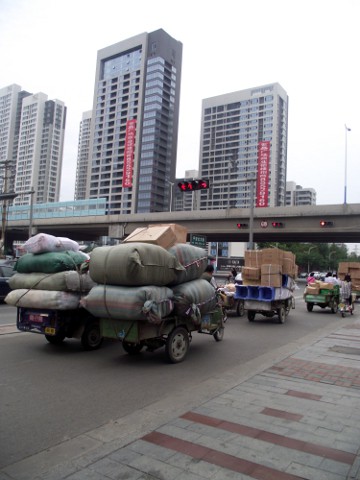 Shijiazhuang is a frantic town with little sensation of history. In comparison to Chongqing, everything (shopping centre, train station, ticket offices, etc.) seemed to be located in one place therefore I found this town very effortless and convenient to travel in. In my opinion, the price of food was much cheaper than in Chongqing and more delicious. Here, it was my first time to try noodles (the real ones), dumplings and many different kinds of fruits and vegetable I have never eaten before. I have visited Hebei Provincial Museum (free of charge) and Revolutionary Martyrs’ Mausoleum. I recommend these places to everyone who might be interested in Chinese history. At night, I went out to see the market square (amazing place!) where some poor people sold a food or clothes on the street. Moreover, some families gathered together in one circle and made some spicy food, very cheap and tasty. The most exciting for me was the view of market shops and stands which were very simply constructed: a stick, 2 wheels and a piece of some material to wrap it all. Finally, the fact that it is so close to Beijing made this place even cooler for me.

The pictures from Chongqing as well as Hebei provinces are available now to see in the gallery. Take care and enjoy your journey wherever you are!
A. 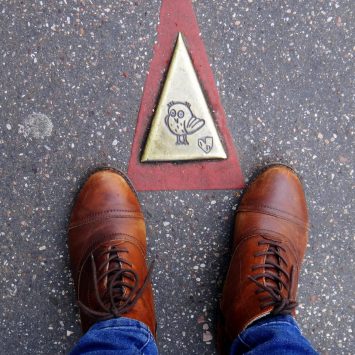 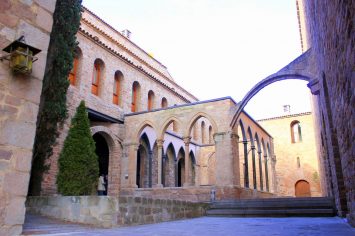 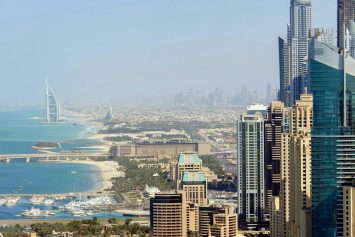 Why Has Dubai Become a Major Tourist Destination?